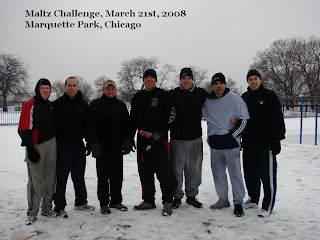 Seven participants braved the weather in Marquette Park in Chicago's South Side to complete the MALTZ Challenge. The MALTZ is hosted by the US DEA in rememberance for M/SGT Maltz of the USAF who was killed in an in-theater helicopter crash in 2003.

Individual times ranged from 38 to 64 minutes...not too shabby when the 2 inches of snow on the ground, the heavy sleet, and the 22-degree windchill are factored into the event!!!

The event is annually held on the same weekend, the anniversary of Maltz's death. Get prepared for next year's MALTZ.
Posted by Louis Hayes at 10:50 PM

I'd like to know if this is a group workout where anyone can join in with you guys? I'm new to Chicago and have been looking for a physically active group that I can join to try to get in shape.

Monique,
If you leave your email for me, I will be sure to let you know when we get together for WOs.