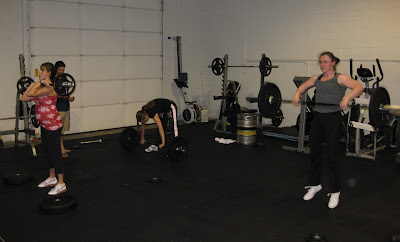 Women are better students than men. At least in the world of physical fitness. They take better to instruction. They don't ignore the seemingly boring foundational movements. They don't let their egos control their progress. And they generally see bigger percentage gains than their male counterparts.
What you do not see in the above photo are tiny pink-rubberized dumbbells small enough to fit into a cocktail purse.  What I do see is a woman who is four months pregnant with twins wearing Olympic weightlifting shoes in the middle of an overhead split jerk!!  I see another who is a gymnast turned ultra-competitive cheerleader (like the ones you might see on late night ESPN). And another who frequently spends her weekends attending barbell lifting seminars!
By the way, none of these women knew each other before the day this photo was taken. They met at a memorial weightlifting event honoring dead police officers. However, what they immediately shared in common was an embrace of barbell lifting within their exercise routines.
They do heavy deadlifting, cleans-and-jerks, overhead squats, and sumo sumo deadlift high pulls. They're not afraid to chalk up their hands and confidently walk up to a bar loaded with bumper plates to perform technical Olympic lifts...lifts that intimidate most men and nearly all bodybuilders!
None of them just walked into a gym one day and began Olympic lifting. They were educated by experienced trainers, and practice regularly.  They began with PVC piping and wooden broomsticks. They progressed to light training bars, then upwards in weight. Now they lift heavy loads with relative ease. We may look at them and think they have mastered the techniques, but they'd humbly disagree and explain how they are still very much students....students who don't listen to their peers when they tell them what women should and should not do, or can and cannot do.  These women have the attitude that they can do whatever they want to do.  And don't argue with them. They're right.
We all need to take lessons from these women. Stick with the foundations. Embrace progress, even if it's not at the pace you'd like.  Keep and open mind and learn new movements. Practice perfection. And most importantly, believe in yourself and your potential.
Posted by Louis Hayes at 1:29 PM

So true Lou! Women tend to be more open to learning new movements and are willing to work hard to get there. I have learned so much about myself and what I'm capable of while spending time with the barbell than could have ever learned doing some boring pink dumbbell routine!