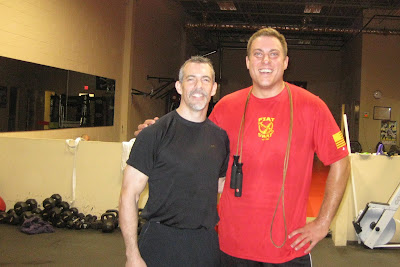 While recently vacationing in New York, there was absolutely NO WAY I'd miss meeting up with old friend George Demetriou and his wife Lisa at their gym. He's the owner and a trainer at Spartan Performance - CrossFit Suffolk on Long Island. I post links to George's articles quite often...probably because he's so passionate about training -- both general physical preparation (CrossFit) AND fighting skills (martial arts).
So I walk into the gym and immediately check out the whiteboard to see what the day's workout was. I knew days before it would likely be something ultra-challenging....probably including one of my goats. And I was right. It was called "Annie," which includes double-unders (DUs). A DU is done while jumping rope, by causing the rope to pass under your feet twice before the next jump. I could have done what I usually do for the Annie workout: substitute 4xs the number of single jumps, **or** man-up and fight through the DUs no matter how ugly. Having only strung together a maximum of five DUs at one time in my past, completing sets of 50, 40, 30, 20, and 10 (with matching number of situps in between) was a super challenge.
I limped through it as RXed...but the real victory was the mental one of facing those daunting DUs. It's amazing what one can accomplish with encouragement. I actually strung together eleven (11) DUs at one point, and six or seven became quite commonplace during the WO.
George and Lisa: besides lunch and the t-shirts, thanks for your continued motivation and inspiration....and oh yeah, for the opportunity and encouragement to face those nasty DUs!! I chalk that victory up to you!!
Posted by Louis Hayes at 12:00 PM

Anonymous said...
This comment has been removed by a blog administrator.
November 6, 2009 at 4:08 AM