Take a look at your lawn or garden. Do you see weeds? Of course you do. It's impossible to have a weed-free landscape. The real question is: are the weeds few and far between, or are they strangling the life out of your flowers? Have you let the scoundrel plants get out of control? 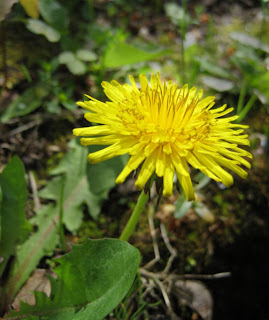 Each of us can identify weeds in our life that (if not kept in check) can prove to be a distraction, or at the worst...our downfall. These temptations can range from downright sinful to merely a waste of time. We're each responsible for identifying the weeds and pulling them from our gardens!
Look at habits in your life and why you do them. Some of them are intrinsically positive, while others are blatantly negative. Some people use religious laws as the compass; others base their actions on the court of public opinion. But you'll see that there's a lot of gray in between the black and white. For me, watching television was in that gray area. It's hard to prove that television is bad. However, it's harder for me to make a case that it's good. It was a clear cut case for me that watching television must be taken in extreme moderation. In America, the average time per day spent watching TV or movies is 170 minutes!!!! That's about three hours of unproductive time. Now if the average American would limit DAILY viewing to two half-hour shows, that would free up close to two hours per day. It frustrates me when I hear friends make excuses to not exercise, but then in the next breath, dissect what happened on the previous night's reality TV show! Imagine the progress that can be made in 14 hours in a week....that's about an extra waking day. So what would you do with an extra day each week?
I decided to take up reading books. I made a short list of books that my friends and coworkers recommended, and started one of them while on vacation. I read it in two days and dropped in the local bookstore for more. I began to feel a "pump" in my brain, similar to a muscular pump after exercising. So began my substitution of books for TV. Both relaxing. Both entertaining. But I felt more "involved" when I read, and like a zombie when I watched TV. Plus, my choice in books was generally educational. Television was definately a weed in my garden.
Weeds take the form of a variety of habits and pleasures: surfing the internet, gambling, hanging out in bars, bad diet, video games, fantasy sport groups, window shopping, and smoking are but a few. I couldn't believe the differences in my life when I pulled even a few of my weeds. For another example, sitting in a tavern Saurday nights and sleeping in on Sunday mornings was a complete drag compared to new practices of living in moderation on Saturday and waking up early for church.
I am definately NOT asking you to abandon alcohol, throw out your TV, or give up simple pleasures in life. It's sometimes those relaxing habits that allow us to reguvinate our bodies after long days and weeks. But are you missing out on the opportunities to set aside time for something a bit more productive? Even without adding positive habits, kicking some negative or unproductive ones will make a huge difference! Start by giving up one or two easy ones...like limiting time online, or playing video games, or watching sports news.
I'll spend plenty of time in the future discussing positive habits for personal growth in this blog. For now, take a walk out on your lawn and see what weeds need to be pulled.
Posted by Louis Hayes at 1:32 PM