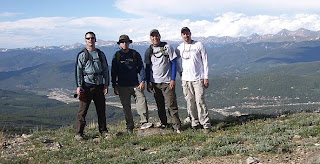 I'm still pondering those words by Tony J: "The body is capable of way more than the mind is usually willing to accept." Why does our brain tell us we cannot accomplish something, even before attempting it? Do we lack that much confidence that we immediately think of failure? I have been described as "stubborn." (I like to call it "persistent." It doesn't sound as close-minded. haha) I do my best to refuse to listen to those skeptical voices, and move on. I'm getting better at tuning those critics out. And with some practice, so can you.
We are surrounded by incredible physical feats. The Egyptian pyramids. A cancer survivor winning the Tour de France seven times. Running a 4-minute mile. Swimming the English Channel. Tunnelling out of prison. Olympic gold medal performances. Each of these accomplishments are at the height of human performance and determination.

What each of these achievements has in common is that the performer had a vision in mind...of success. Those men and women who climb Mt Everest don't just wake up one day and decide to do it. For these pre-planned events, a great deal of preparing has to be done. The physical preparation begins with climbing a number of smaller, less technical mountains. They gradually tackle more challenging and difficult routes until the climbers are ready for Everest. This takes years and years of readiness!! But that vision of the summit keeps them going.

What else these events had was an end. These performances were (and are) quantifiable. When the English Channel swimmer reaches land, it's over. When the jailbird escapes into freedom, it's over. When the last block gets laid on the top of the pyramid, it's over. Numerical values and a feeling of completion can be a driving motivator. Measurable progress allows us to see steps are being taken closer to the goal.

Lastly, these performers ignored the critics. Business and sporting competitors alike are frequently known for mind games and trash talk. For others, it's friends or family. For others, it's a boss at work. However, for many, the critic is inside our own head. The world is filled with those who plague others with degrading criticism that they can't reach their goals. Whoever the skeptic is, we must learn to ignore their banter. Too many awesome feats have been reached by humans to get me to believe cynical advice. But when that voice inside listens to the actual nay-sayers, and begins to regurgitate the nonsensical ramblings, we find it harder to ignore. Doubt itself is not bad; we all need to look at things realistically. But too frequently, doubt keeps people from even trying. What a perfect example of the mind limiting the body's capabilities.

So back to my stubbornness. I have called myself the poster child for "Be careful what you wish for; it might come true." But through it all, why can I seem to regularly reach what can be described as lofty, unattainable goals by others? Is it because I refuse to take the cynical advice of others? Was I pre-programmed with a drive and motivation that gives me an edge on competition? Have I not set high enough goals for myself? Maybe I've got a knack to block out my critics? I owe some successes to pure luck. But I'd still like to think that just like in a card game, a monster-dealt hand still must be played correctly. I'd be a stage-fraud if I didn't acknowledge help and encouragement along the way. I've been fortunate to forge friendships with tremendously educated, positive, motivated, fit, inspiring, and successful mentors. And I've always found someone to hold my hand through the challenges. Many of them share a stubbornness...maybe there's something to it. What a blessing to have so many positive forces in my corner.

I rarely allow my failures to get the best of me. I look at defeat as an opportunity to address a weakness. And if I have another opportunity to go at it again, I usually do. Why is it so hard to pick ourselves up, rethink a new strategy, bust our hump, and go back for more? Failure without learning is just a painful kick in the pants.

Last month, we posted a lot of discussions about the Murph for Miller workout. For some, this Murph workout was one of these demonstrations of human performance and determination. (For others, it was merely a walk in the park.) I have more appreciation and awe for those who came into the workout and said, "I'm gonna complete it no matter what the cost!" than I do for those elitists who were racing the clock. I could detect the pride and satisfaction in those faces of the competitors who were happy to even have just completed it...much more easily than I could in those faces of the tremendously fit who got a great score/time. Who displayed more guts and courage? I'm not discounting excellent performances by any means, but going into the workout with doubts, and overcoming them is a super feat!!

So what goals do you have? What accomplishment is on your horizon? Do not allow critics to tell you that you cannot do it. Maybe your goal is to run your first marathon. Maybe it's to complete next year's Murph for Miller. Whatever your goal is, you probably won't reach it tomorrow...that's a little unrealistic. But with planning, preparation, training with mentors, and taking all the help you can get along the way, you can reach the peak. And once you do hit the summit, enjoy the view!

Like I posted in Part 1, I'm really stuck on Tony J's words. Start thinking about how the body and mind should be working together, not in opposition. Part 3 might be renamed: Body WITH Mind.