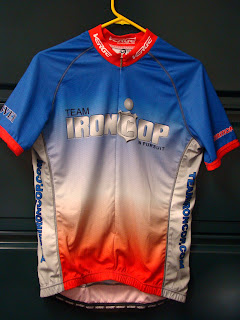 Our friend Joe G down in central Illinois just had some shirts made up for his IronMan triathlon group. He sent me some photos, because after I learned they had a swine-o-sorts on the back, I had to get one. They'll go great with the Sloppy Hogs adventure racing theme!
Pricing: they're $65 for a tri shirt, and $85 for an elite bike shirt. (I'm not sure what makes it "elite," but it sounds pretty high-speed....haha.)
Joe G has a group of cops running half and full IronMan races. They wanted to race under the same "color" or team. This was their original design. For any of you LE triathletes or bikers, here's the opporunity to join the club and show support for endurance fitness among police officers.
"We have a big race on Juily 6th in Decatur for a fallen ISP Officer Rodney T Miller. We will have 20+ from various agencies wearing these shirts during the race," writes Joe. They're doing great things down in central Illinois.
I've been told there is an order going in for some tech (moisture-wicking) t-shirts also. I'm not really the bicycle shirt wearing kinda guy, so I might be waiting for the tech shirts to come out. 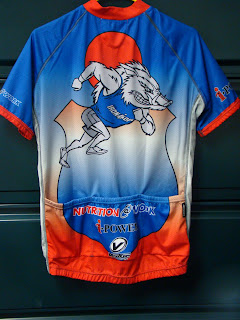 Send me and email or post a comment to this post if you're interested in tacking on an order to Joe G's order being placed sometime SOON within the next weeks.
Posted by Louis Hayes at 12:30 AM

I am not a cop but would wear an IronCop tri shirt if they come in small or extra small.

Also, let me know if any of the Iron Cops will be at Lake Placid, since I'll be there.