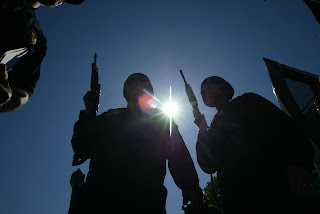 FUNCTIONALIST: One who prepares for a life strewn with physical tasks, efforts, and obstacles (both planned and unexpected), by learning, mimicking, and perfecting those body functions and abilities necessary for survival, completion, efficiency, and victory.

Now that's far from any scientific or sociological definition. Don't look for it in any official glossary. It's a wordy creation to describe my mindset (and ultimate mission) regarding my fitness program...a uniquely-tailored workout routine.

To begin as a functionalist, one must first recognize the physical nature of life. There are certain seemingly mundane tasks the average person does on a regular basis: get out of bed, bend over to tie shoelaces, carry bags of groceries, lift heavy boxes, play with their children around the house, and yard work. The list goes on. And every day, somewhere, someone gets hurt or injured doing one of these ordinary chores.

If one happened to pick a career of starched shirts and neckties, any bit of a physical aspect to his/her life might include only voluntary routines: a workout program or sport. Maybe s/he likes to run 5Ks, or lift weights, or play in a basketball or volleyball league. Their careers might be sedentary, but their lives are not! But does that triathlon hobby transmit to an increased ability to move furniture or do heavy landscaping around the house?

For others (much like the garbage man), a job might be the most physical part of life. I had two such jobs. I first recall days working in a warehouse. There was a tremendous amount of lifting, dragging, carrying, and moving of heavy, unbalanced, and awkwardly-shaped boxes. I also remember summers replacing storm sewer pipes...digging, hammering, breaking, and throwing. These were jobs that left me exhausted at the end of the day. However, these jobs' physical tasks were completely known and anticipated.

And at the extreme physical nature of work lies public safety. The jobs of firefighter, law enforcement, and military fall into a unique category: massive amounts of sedentary lifelessness, infrequently interspersed with short bursts of high intensity. Some of these spur-of-the-moment events ask the doer for odd physical needs such as clearing tough obstacles or fighting an assailant. Regardless, it is not the suddenness nor the intensity which steers FF/LE/MIL training. It is the potential catostrophic results of failure! Elite fitness is a MUST in public safety careers.

But this article is not solely for FF/LE/MIL. It addresses a much broader group: Functionalists. We each have a bit of functionalism inside us. So what "functions?" At one end of the spectrum there are those who look at purely a better "quality of life" (being able to perform daily tasks more easily)... for example carrying laundry baskets and shoveling snow. Or becoming better at sports and hobbies. At the opposite end, there's a public safety group (who also has quality of life concerns), but MUST be physically (and mentally and emotionally) prepared for life and death struggles at a pin drop's notice. In the middle, there are physical job employees where it's not a life and death battle, but efficiency gained by increases in a worker's physical abilities. What all three (3) of these crudely gathered groups share is the need to complete everyday life tasks. These body movements include:

A physical worker (if s/he decided to workout to prepare for the job) might add certain movement patterns to this list. And a FF/LE/MIL employee should identify specialized skills and abilities. But like I said above, there are movements each and every one of us must master to live a productive physical life. We're not all trench diggers or SWAT police officers, but we are all human animals required to do physical tasks...with some basic fundamental level of fitness. If our current fitness programs are not addressing the above list of movements, we are neglecting our most primative needs.
Posted by Louis Hayes at 4:10 AM