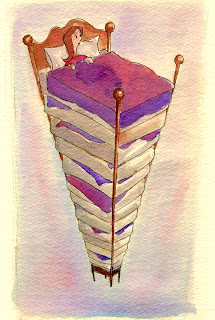 The entitlement attitude paves the road for a reliance on a luxurious lifestyle. The more one gets (or provides for him/herself), the more one “needs” to get along. When one subscribes to a “because I want it” approach, rationale begins to leak away. A dependence on certain lavish items gives birth to an inability to adapt to anything less than extravagant.

Recall the childhood tale about the princess and the pea. She could feel the feel the single pea under one of the mattresses in her stack. The princess could not sleep with that one seemingly simple annoyance. She would NEVER “survive” a night spent on the couch or the floor. This princess’s adaptation to nothing but the most comfortable luxury severely limits her ability to endure the slightest hardship. While the tale of the pea under the mattress stack is unrealistic, the same moral is told time and time again in a modern way: needing that specific coffee shop’s specialty drink, requiring a certain type of bed pillow, being a picky eater. To less of a degree each of these must-haves increases the disparity between daily customs and true bare-bones needs.
Here's a very recent tale of a rookie endurance runner: This past Labor Day holiday weekend, I ran a half marathon. Despite being in the best physical shape of my life, I promised a brand new runner I would run with her. I abandoned hopes to run a personal record (PR) to be with someone I knew would appreciate my company during the most grueling physical task in her life to date. Before beginning her training program, she had never run even 5 miles! And in less than 5 months, she was well on her way to running the full mileage. She hurdled injury and setbacks to complete more than a few 10-milers along the way....but never topped that. Race day came on Monday. In mile 9, the pain in her legs was reaching the threshold of what was tolerable. A few tears were shed, but she confidently said she would never quit. She made a promise to herself five months ago that she would finish a half marathon. She spent endless hours training. And today was that opportunity to realize that goal!!! Her emotional courage and strength contributed more to her performance than her physical training....she could have endured ANY challenge with that spirit she brought to the start line. She "gutted" it out. What a fantastic experience FOR ME to witness such a rare testament of emotional powers at work.
During hard times, quitting is always an option. Giving up or dodging the issues can be path of least resistance. However, either of these choices is rarely the right answer. That sense of guilt residing within the quitter is proof. Those with emotional strength are the ones who listen to the voices that say, "I will get through this," "I will survive," and "I will win."
So, analyze these two cases: the Princess and the Pea and the rookie endurance runner. Who has given herself the practice to deal with hardship? Who has gifted herself with luxury to the point of acclimating herself to comfort? Who has experienced the confidence to overcome challenges after completing a difficult one? Who has contended with that temptation to quit and give up in the face of pain and discomfort?
We return to that hopper of randomly-chosen life challenges, and pick one. Who do you gamble on? The princess or the runner? I know where my money is....I ran next to her for an emotional 13 miles this weekend.
Posted by Louis Hayes at 7:55 PM