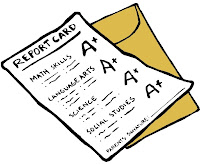 During the last Thanksgiving Week, I thought about a blessing that I never really spent all that much time pondering, much less appreciating: Praise and Encouragement.
It might sound a bit silly for an adult man to put stock into something so seemingly childish as Praise and Encouragement....after all, we don't hear all that much of it as adults! There's a lot more beating down than building up.
As a child, I had two parents who showered my brothers and me with encouragement.  We were told from the time we began rolling over and crawling that "we can do it."  As we got older (and probably like most children) our parents told us that we could accomplish anything we wanted to.   And probably like most kids, I brushed those comments off. It hasn't been until much later that I realized my parents were actually right. I really could do anything.
I look back at all the successes and failures in my life, and notice an overwhelming trend.   Whenever I set a goal and it was an important priority in my life, I generally succeeded. Maybe not at first, but eventually. Good grades. Friendships. Contests. Lofty goals. Jobs. It didn't matter. If it was important to me, I got it.  Yet I must clarify that when I use the term "important to me," I use it with utmost passion and emotion, and with true ownership and commitment. Consuming thoughts and efforts. Believing and visualizing.
I got good grades and academic awards in school. I had successes in athletics. I forged lasting friendships....(the standard pre-determined goals of American youth)....a common storybook tale.  But I do NOT tell my story to you to recall childhood successes.  Rather I tell it to link ADULT success to this childhood praise and encouragement.
When as a child I heard words of compliment, recognition, affirmation, and motivation, over and over again, I'm not sure I had any choice other than to believe it. I now realize those parental commendations as a small child had been weaved into the very fabric of my now-adult character. A fabric woven so tightly it cannot be ripped, torn, or shred.  I now have no choice in life other than to believe I CAN DO IT.
Today, I get challenged with, "Who do you think you are?" or "You'll never be able do that." Verbal doubts like those above are whispers against screams. They're water droplets on a raging wild fire.  Today, I get described as: focused, competitive, selfish, confident, determined, pompous, committed, self-centered, faithful, arrogant, resilient, stubborn, cocky, assured...some terms obviously not as welcomed as others. I've been told I come across as one who thinks he's better than others.
In recent times, I have been cautious of how I come across to others.  My character is frequently misinterpreted as a superior-than-you attitude.  I honestly hold firm that adults both suppress and find themselves uncomfortable around others who possess the "I can do whatever I set my mind to" attitude...an attitude that is acceptable for a naive schoolboy to innocently (and wrongly) have, but not a grown man.
So why is this attitude acceptable for a naive schoolboy, but not an educated grown man? Is it because most adults have grown out of the "I can do it" mentality after experiencing failure? Is it because they never really believed in the power of the mind and commitment to succeed?  Did their parents fail to instill the invincibility during impressionable years? Maybe it's easier to swallow failure for those doubters? What it really boils down to:  refusing an "I can do it" approach gives an "out"...an excuse to fail and gladly accept it.  I guess if you don't commit to it, it's not really failing, right?
What winnings and successes have you experienced in your life? To what do you attribute them? Hard work? Outside support? Perseverance? Belief?
It is OK to possess the attitude of "you can do it."  After all, you really can do it! My parents were right. Yours probably were too.
In this winter Christmas  season, make an extra effort to set fitness goals: weight loss, a certain time or performance on a benchmark workout, a commitment to complete a workout program such as the Prison WO....whatever it is, feel free to post your goal on the comments here! It might force you to put in that extra effort!
Posted by Louis Hayes at 8:00 PM