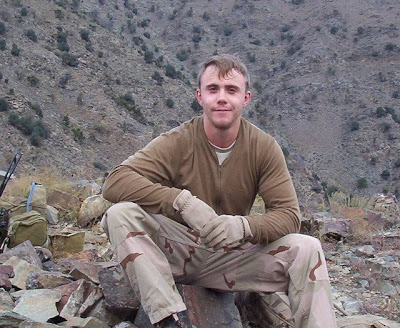 The second annual MURPH for Miller is scheduled for Saturday, May 2nd, 2009. This year a local gymnasium TriCities CrossFit in St Charles, Illinois, is hosting in their new facility.  We will run start clocks on the top of every hour starting at 9:00am through 4:00pm.  We are also asking for volunteers to assist as "counters." (Anyone who has done a MURPH quicky learns how simple brain function such as counting deteriorates.)
MURPH is a CrossFit workout named in honor of Navy SEAL LT Michael Murphy, who was killed in action and then received the Medal of Honor. His honorary workout is as follows:
It is simple...however not easy.  This is an individual event. Your "score" is total time. Here is a link to training and prep advice for last year's participants. In addition to the full MURPH, participants can do modified versions such as: Half, Assisted (jumping pullups or assist bands), and Body Armor.
A nominal donation of $25 is requested. Last year we raised over $1200 for the Special Operations Warrior Foundation.
About Robert Miller: US Army Staff Sergeant Rob Miller grew up in the Wheaton area and attended Wheaton North High School. He was a competitive gymnast and a highly skilled athlete. He enlisted in the United States Army in 2003 and was accepted into the Special Forces selection and training process. He graduated and received his Special Forces tab on September 30, 2005. He was assigned to the 3rd Special Forces Group and deployed to Afghanistan to support Operation Enduring Freedom from August 2006 to March 2007.

Rob returned to Afghanistan for his second tour in October 2007, where he served as a Weapons Sergeant for his team.

Rob was killed in action on January 25, 2008. He was killed by enemy fire during an ambush near the Pakistan border. He died while providing cover fire for the evacuation of his team captain, who was seriously injured at the beginning of the attack. Rob’s actions saved the captain’s life and enabled his team to gain cover and return fire.
Read more about Rob's courageous story here. Click the label MILLER for more information about this event, including some MUPRH for Miller 2008 entries.
Posted by Louis Hayes at 12:20 PM