Exercise of the Week: "CrossFit Total" 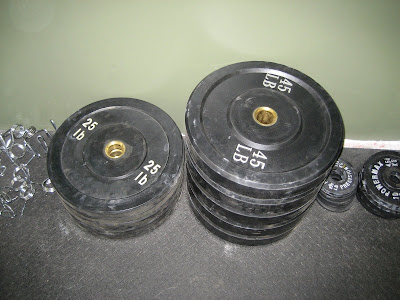 The CrossFit Total (CFT) is a scored workout. But is different than most "typical" ones. The CFT is explained in this CrossFit Journal entry. Basically, the CFT score is the sum of pounds lifted for maximum effort (1 rep) at:
This is a true test of pure "old school" barbell strength. There is no time limit. There is no stopwatch. There is no added point value for completing any lift any faster. Just get the weight up. This is in contrast to many of the popular CrossFit workouts, such as the MetCons. While much of CrossFit is based on constantly varied, functional movements done at high intensity....the CFT is compromised of functional movements done at maximum ability in weight.
Frequently the smaller statured people fare much poorer at the CFT than their larger counterparts. These same smaller statured people often roll over the larger ones during gymnastics circuits. For example, a 160# male with 20+ rounds of CINDY, might only manage to total out at 750#, where a clydesdale at 240# might only get 15+ rounds of CINDY but hit a 1000# CFT. The most fit find themselves as a blend of both worlds.
The strength aspect of CrossFit gets overlooked many times. If you have been eying up CrossFit, do NOT ignore the "one repetition maximum" component. The MetCon WOs are somewhat of a staple in the realm of anaerobic capacity and work output, but not at the cost of pure strength.
Personal note: I did the CFT last Monday. It was my first attempt ever at it. I totaled out at 925. I scored the following: a 190# press, a 335# squat, and a 400# deadlift.
Posted by Louis Hayes at 8:30 AM

Awesome job on the total! Only your first time doing it and almost at the 1K mark!

If only I can get all 3 of my lifts to cooperate on the same day I could be consistently in the 500+ category.