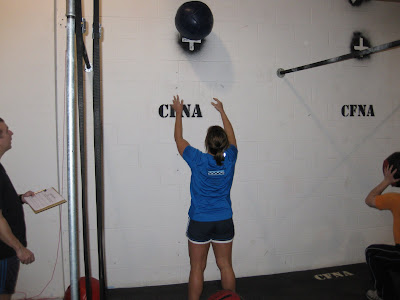 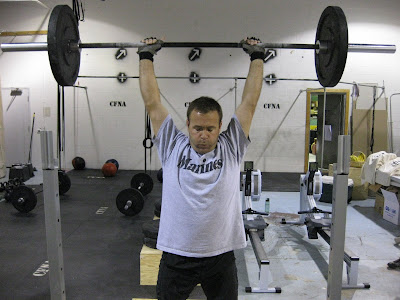 There was a great turnout at CrossFit of Naperville for the charity event this weekend.  The Saints for Sara charity was set up for a Chicago Police Officer's 4-year old daughter with cancer.
The selected workout was called "Fight Gone Bad."  It's a 17-minute session (three 5-minute rounds, separated by 60-second rests).  Each of the following movements is performed for 60 seconds. The goal is to maximize the total number of:
I chose to run my performance alongside an old high school friend Tom M.  We pushed each other in true CrossFitter fashion. There is something motivating about looking up at your "competition" as he rips out reps as you're slacking while grabbing a breather. Makes you want to get back into the fight.
The other photos are of Jim Q and Rhonda A.  They were both FGB first-timers. Great job!
Posted by Louis Hayes at 11:47 AM

Way to rock it Lou!

I guess you can say I fell into the category of "Fight Went Wrong". Glad to help Pukie represent.

Tom's a little mad at my lackluster performance with our camera... I told him most of the good pics were on yours, at least I hope! I would like to get those files from you sometime, somehow...

Is the Maltz Challenge coming up? What are the details? Thanks, Pat

Pat,
I just heard from the DEA agent who is organizing the MALTZ in Chicagoland. Looks like Fri 03-13-09 at 1400 in Marquette Park, Chicago.

Dude, I can only hope to work up to your level!

Happens to the best of us. The price you pay for pushing limits.

To everyone that came out,

Thanks for coming out and supporting the event.

had a blast
thanks lous
jim q

Way to go everyone!
It was a great event and a big shout out to CF for their hospitality in hosting.
Hope everyone is recovered...