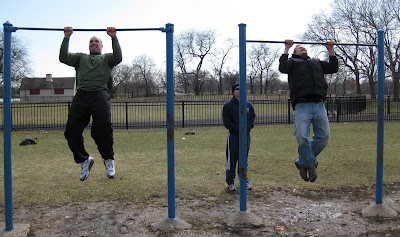 This year's MALTZ Challenge was held in Chicago on Friday, March 13th, 2009. Each March, the US Drug Enforcement Administration (DEA) sponsors a memorial workout through their various field offices across the country. The workout serves as a remembrance event for a Special Agent's brother, Michael Maltz, an Air Force PJ killed in action several years ago. The MALTZ Challenge is:

The Marquette Park (67th/Kedzie) location has both its positives and negatives. There is a running track, dip stations, pullup bars of various heights, and a nice grassy field. It's a great location when the weather is nice. We learned last year that doing pullups and situps in sleet and snow kinda sucks. However, this year the weather cooperated. Except for some muddy puddles that covered ankles during the dips, the 40 degree temperature was ideal!

Here were the highlights:

So... start thinking about next year's MALTZ Challenge Chicago. It's always in mid to late March. Hope to see you out next year!
Posted by Louis Hayes at 11:23 AM

You're right on the money, my vest as set up for the challenge on 03-14-09 was 29 pounds (front and back plate). I figured that if I am to train for the fight I must train like I fight. I don't often train with a vest, ankle weights or waist weights but I am now! I find myself preparing for the fight when I'm on the range, when practicing my movement and other areas, why not PT? When I'm at work I'm not in shorts and a t-shirt although the offenders I pursue often are, so why train in shorts and a t- shirt. I'm making a commitment from now on to train weekly with a weighted vest and ankle weights to simulate boots and other gear. I am also going to push my fellow team mates on Cook County HBT to do the same. I often see the firemen at the many stair climbs that I have done as they climb the same stairs that we may have to climb to persue an active shooter in thier gear and wonder if myself and my team mates could make the climb. Point being, I now intend to train in like I fight, in gear.
Thanks for being out there, creating this blog and pushing myself and others in the LE community.