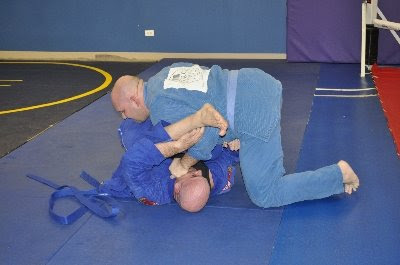 Dan E has been with us since the start of our organized stair workouts. He came to us with a history of strength training, and was looking for something different. Dan continues to push us through different aspects of fitness. He's always bringing out his beer keg, sledge hammer, tire, and sandbags. He sent our group this email this past weekend after a martial arts tournament. His story is inspiring.
Yesterday I competed in a Brazilian Jiu Jitsu tournament, Corral's Combat Classic (C3) held in Indiana. I competed in two different divisions: Blue Belt Absolute, which was a winner take all 22 man bracket consisting of all weight classes; and the Blue Belt Adult Superheavy weightclass, which had five competitors in it.
In the Absolute division I won my first match my submission and lost my second by points, 2-0. In the Superheavy class (which goes from 210 to unlimited, I weighed in at 235 lbs.) I placed third, winning one match by submission and losing one by points.
Irregardless of how I did or how I won, I learned a few things about my BJJ game and my level of fitness. But to tell that tale I need to lay down some backstory...
I started training BJJ in March 2005 and competed in my first competition in May 2005. I was about 285 lbs when I started and really only lifted weights. Sure, I did squats, deadlifts, overhead pressing, Oly lifts, etc. but didn't train aerobically or anaerobically. I figured I trained BJJ three times a week and that was enough "cardio," for me. I competed sporadically and did well, but always either gassed and had to hang on for the win or lost due to a lack of conditioning. But, I didn't change how I trained outside of BJJ.
Fast-forward to this year... January 2009 I weighed 275 lbs. and decided two things:
I greatly increased my functional fitness training, tracked my diet, and saw some great results. I've lost forty pounds, increased my aerobic and anaerobic conditioning, and really saw my BJJ game improve. I'm able to roll hard for the full six or seven minute match and can push the pace of it. Moreover, I'm able to recover quicker. I saw this in action during yesterday's competition. Even after a hard six minute match I recovered within a few minutes and was ready to go again. Even later that night and the next day I felt pretty good. There was some soreness, but nothing worse than what I've felt after a hard Swallow Cliff workout.
Today I talked to a training partner who also competed yesterday. He trains as hard as anyone on the mat, but away from it his training only consists of running on a treadmill. I asked him how he felt and he replied that he was exhausted and sore enough that he might take the week off from BJJ. Me, I spent an hour in the water scuba diving today and can't wait for Tuesday's BJJ class.
I learned alot yesterday, and realized one more thing- I'm too small to compete in the superheavy class and need to lose another 26 lbs. to get to the heavyweight class.
So, thank-you to everyone I've trained with and who pushed me hard in our workouts. You've helped me achieve some of my goals and given me the tools to achieve the rest.
One of the things I like most about Dan's personality is his open-mindedness....he'll try any workout, any format, any movement, any structure. His open mind has allowed him to reach another level. Take a lesson from him. Try something new!
Posted by Louis Hayes at 6:00 PM