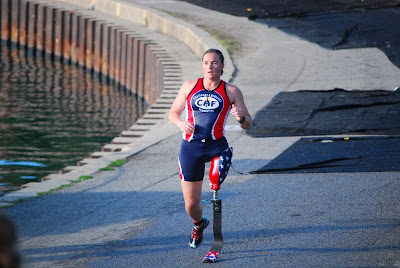 One of my brothers and I were down in Chicago to cheer on our other brother in his first sprint triathlon. We are waiting along the course to get another glimpse of him. Oddly there was a break in the steady stream of racers exiting the swim, off to get their bikes. Around the bend I saw a runner with an odd gait, soon to realize she only had one leg.
We stopped dead in our tracks. The otherwise quiet crowd begins cheering and clapping like I hadn't heard it that entire morning! What an unbelievable experience to watch her race!! At that moment, so many thoughts, emotions, and questions fill your mind. My brother manages to snap a few photos before she speeds by. We in our cheering group talked about her for a while after she disappeared.
I got home. I couldn't let it rest. Who was the woman? What happened to her? What's her story? I check the photo. I needed to know who this woman was. She wasn't the first para-athlete I'd ever seen. Just something about that dramatic way she entered into view and inspired the crowd as she passed...with no other racers around her. With no bib number visible on her arms and knowing nothing other than what's in the above photo, I didn't have many leads to investigate. I won't bore you with the Googling details, but I eventually identify her:
1LT Melissa Stockwell, 1st Cavalry Division, United States Army.
I came to learn Melissa lost her leg when an IED exploded during a convoy in Iraq. She quickly returned to active sports, including swimming and triathlons. She was a Paralympian in the 2008 Beijing games...swimming in three events. We just so happened to see her during her first international distance triathlon right here in Chicago!! A real blessing.

Little more needs to be said about this amazing woman. Not many like her around. I'm thankful for having been able to see her today.
Link to her blog and website.
Posted by Louis Hayes at 9:00 PM

Thanks for posting that!

Amazing Lou! God Bless her, she is the true hero! Thanks for working to identify her!