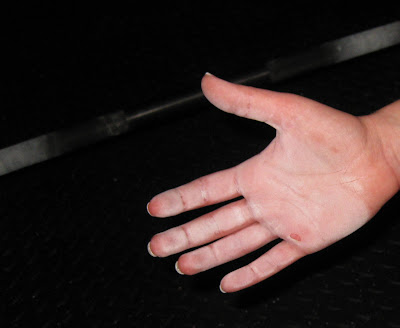 There is something rather sexy about a woman with gym chalk on her hands.
Maybe it's the attitude they take with regards to that activity in which they are partaking in that exact moment. Hey, I know this might hurt my hands, but the reward is worth the risk. They chalk up their palms in preparation to attempt something difficult, knowing they might fail. I'm giving it my all. They work through the pain until the task is complete. The momentary discomfort is less than the lasting sting of failure or quitting.
The above photo is of my wife's hand after PWO#3 - Zeta (a grand total of 6000# from ground to overhead using any movement, load, or repetition scheme....for time, of course). She just got finished with clean-and-jerking a total of THREE TONS of weight!! 34:30 of continual full-body movement.
I posted an entry on this blog: "Hand and Callus Care." I never really embraced the whole "Check out my nasty ripped up hands. I'm a stud" mentality. But after seeing my wife's rip this week, I had a slight change of heart. After all the kettlebelling she's done, and after all the care she gives her hands, she still got a rip. And now I'm that guy who posts a picture of messed up hands on his site saying, "Hey look at this!" I guess it's the pride of having a partner whose determination and focus won't let her quit. (By the way, her C&J form was most excellent!)
It really was a "rite of passage" for her. She completed the 6000#. She didn't even say anything about it until after the WO. This injury simply had more to do with pure volume of work rather than neglect of hand care. And now she can join in the silly discussions about calluses, and bar knurl, and pumice stones, and skin graters, and pullups, and hand lotions, and how she still managed to get a rip. Her first rip.
And I got to cut off the flap of skin!
Posted by Louis Hayes at 10:09 AM