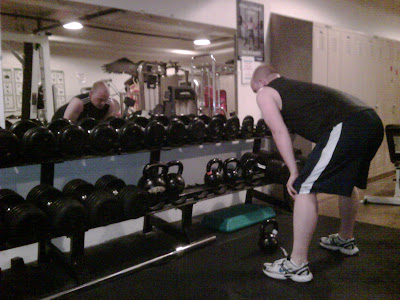 For all parts of this series of posts, click here.
In part two, I discussed the variety of movement patterns. In this part, I discuss the variety of loads and repetition schemes. Variety does not equal random. However, variety does equate to diversity. There seems to be some difference in opinion when it comes to how one should select weight or load for a particular movement. What follows in my case for a wide spectrum of loads and repetition schemes.
I picked the above photo because of the dumbbell rack. It contains DB pairs from 5# to 80# and KBs from 15# to 75#. Life is full of difficult choices. It looks as if the man in the photo is staring at the rack trying to decide what weight to use....
Strength, Power, and Stamina are all related to the body's ability to do work. Here's some very basic (and bastardized) definitions:
Yes, very basic definitions indeed. So what is more important for general health? Where should training time be focused? How do you increase abilities in each "domain?"
First and foremost, I put "domain" in quotation marks because there are not clear delineations between the three physical components of Strength, Power, and Stamina. They really are inter-related. If anyone knew exactly how, s/he would be the greatest conditioning coach of all time. Even among so-called subject matter experts (SMEs) there is great debate....different strategies to build abilities and performance, conflicting priorities, and ego clashes.
Strength = Strong. For example, one of our guys just deadlifted 585# (at about 210# bw). There is no time or speed component to this. Can the workload be completed at all? Yes or no. Pure strength can be measured in an athlete's 1RM or 3Rm for a particular lift or movement. Basically, at what load can the athlete no longer complete the task? Athletes who participate in 7x1 training will get strong! They continuously hit higher limits of ability.
Power = Fast. Power is a highly measurable piece of data. It factors in distances, times, and weights. (Click here for the posts on my Power Study.) So, if two men can both deadlift 585#, the one who does it faster is more powerful. But this also equates to sub-maximal lifts and movements. Let's say an arbitrary load of 275# was chosen during a competition. The lifter who could rip out 40 reps the quickest is the more powerful. Or the lifter who tallied the most reps during a 60-second time limit is the more powerful. As weight goes up, speed generally decreases. Somewhere in the middle, there is a "sweet spot" that maximizes power output...high enough weight at a fast enough pace. What about a shot putter? Throws, jumps, and plyometrics build powerful athletes.
Stamina = Durability. The lines begin to blur. A college football player I know did a back squat test at his gym: Back squat 225# as many times as possible, without racking the bar. He scored 61 repetitions. Holy crap! That is stamina. But it also has components of being strong and also powerful. Let's change the rules of this test. What if the challenge used 135# instead? Would a more durable athlete have beaten him? Or if the test used 365#, would an athlete with more pure strength beat him? What if it was an air squat contest? Same movement pattern for all variations. But likely different results.
Using the Front-Squat-Push-Press exercise as an example. The thruster or wallball movement patterns are fairly identical. But depending on weights/loads, height of target, and repetition schemes/numbers/formats, the workouts can cause totally different adaptations in the body's functioning. Here are a couple of workout sessions or tests that implement thrusters or wallballs:
Above are five randomly selected challenges or workouts. Each tests different components of Strength, Power, and Stamina IN THE SAME MOVEMENT PATTERN. Option C clearly builds and tests pure strength. Option A clearly tests stamina, but power can also be calculated. Option E clearly tests for power. Options B and D are up for grabs. Has anyone ever heard of "strength endurance?" Tom G throws that term around a lot. I like it. It refers to a balance.... it's lifting moderately heavy weight for a long duration or lots of reps.
General Physical Preparedness models must incorporate many loads and weights to be considered truly hybrid programs. For those who have participated in PWO#2, you probably used a relatively light KB...one you could do many repetitions with. One downside to PWO#2 was that it did not contain pure strength-building strategies. It did wonders for my stamina, but did not increase my abilities to lift maximal loads. Conversely, other workout programs might rely too heavily on pure strength methods. They might use a lot of 5x5, 5x3, 3-3-3-1-1, or 7x1 programming. The programs develop huge abilities in pure strength, but lack in stamina or power components.
So is the answer for a hybridization model to select above Options B and D because they balance the three components? No. The answer is all of them. And more. Well-rounded programs plan for a fight on all three fronts. Some strength-building, some tests for power, and some gut-checks for stamina. But spend extra quality time where you need it most.
How to put them all together? You got me. Periodization? Variety cookie-cutter program such as CrossFit? Contrast training? (each link is to an article that I had previously posted. Yes, read them again in this context!) I don't believe there to be one right answer. We all bring a different body to the testing grounds, and we each adapt differently to stimulus. What I do believe is that any GPP program must address each aspect of Strength, Power, and Stamina to be effective and efficient at building healthy, fit people.
So is selecting the proper weight really all that important? I can make cases for both yes and no. And now after reading this rant, I hope you can too. Have both cases ready for the next time we meet up.
Posted by Louis Hayes at 11:00 PM

If daily physical demands where predictable and never changing then there would be no need for a variety of strength, power, or stamina training and there would only be one weight in the gym. For most of us, the demand for physical or mental exertion is not a life or death situation. I include mental exertion because I believe that a far too often overlooked benefit of a functional workout that challenges strength, power, and stamina is mental toughness. How many times have you encountered a 35lb dumbbell that wants to be carried because they are tired of riding their bike, for which you pick it up and curl it 10 times and the physical challenge is over. Now, if you have worked out with unpredictable loads and random intervals that require the entire body to be engaged, then you look at the challenge and have confidence that you are not only up to it but you will also not be hunched over the next day in pain.

I may be crazy but I train with the idea in my head that I am preparing for a life or death struggle. Don’t get me wrong, I don’t picture gangs of thugs attacking me or random bar brawls, although it sometimes crosses my mind, “what would I do?” To me the life and death struggle is about the ability to enjoy every moment of my life to the maximum, not limited by physical/mental limitations or stamina.

To the point, how do you put SPS all together in a workout? I balance my workout with a single strength component (C&P for now) for which I intend to make slight gains every week and then it’s a role of the dice. No I don’t subscribe to the MSU workout, I actually role a set of dice. The dice decides how many more minutes I must work. Once I know how many minutes; I challenge myself to set a new record for total repetitions for that prescribed time which can include various exercises. The weight doesn’t change but the pace does. Snake eyes isn’t the easy day; in fact without a rest period I have found that it can be the most challenging.

You can't possibly put SPS all together in a single workout. If all you C&P is maxed out at X kilos and your goal is to perform max reps in Y number of minutes, can you see the difference in simply being able to perform 3X pounds? or 6X pounds?

I'm not sure I can put any more thought into a rebutal or answer without knowing more than what is included in your comment.

Send me an email..