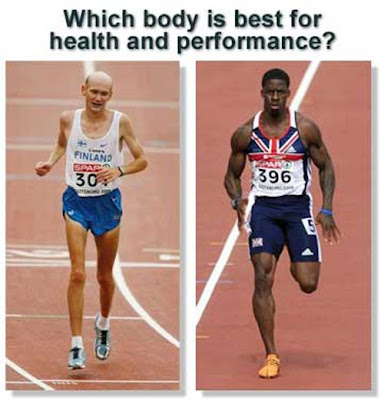 For all parts of this series, click here.
A discussion and comparison between General Physical Preparation and Sport Specific Training can easily be a semester's worth of college study.
First off, let's try to explain what each of the above competing methods mean. Here are some talking points:
General Physical Preparation (GPP)
Sport Specific Training (SST)
I am not advocating one over the other. At least not yet. There are clearly times and places for each of the above two strategies. What I do suggest is that many people might be improperly choosing GPP or SST, for the wrong reasons....and ignoring some aspect of the other philosophy when appropriate! Here are some case studies:
Many of you readers are sport athletes. (Some of you might be painfully offended by my stance on well-rounded fitness.) Many of you are in public safety careers too. However, I also realize that a vast amount of you have never and will never either seriously compete in sporting contests nor face a life-or-death situation. However I ask you, what is the difference between the sort of fitness required by Navy SEALs and an elderly grandmother?
The answer is: the only difference in fitness between a Navy SEAL and a grandmother is in depth and intensity, not in type. Grandmas and SEALs both have to move their bodies in and out of the same positions. These positions and human movements have been designed by our Creator. Grandmas aren't necessarily fighting for their lives, but they do fight getting off the couch. They might not be lifting ammo cans or dragging downed comrades, but they are carrying grocery bags, luggage, and vacuum cleaners. The movements are the same...it's only the speed and load that changes. And of course the penalty in failing. When a SEAL fails, people die. When grandma fails, she needs some help.
I agrue that ALL people need to adhere to some sort of GPP program. All people. Some also need a bit of SST.
If you are one who has decided to workout to get healthier or more fit, I challenge you to examine your program. If you are ignoring a certain aspect of fitness, or spending way too much time on another aspect, why? Are you training for something specific? Or for something general? There is more to being "in shape" than lasting 45 minutes on a run.
If you find yourself among the GPPers, maybe there is something to be learned from those in the SST arena too.
In addition to preparing for sport....don't forget to train for life. Look to a GPP program to breathe new life into cross-training.
Posted by Louis Hayes at 9:30 AM