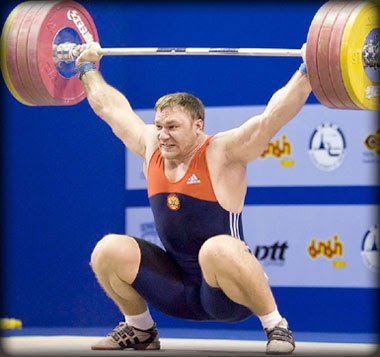 Olympic Weightlifting and Powerlifting are possibly two of the most misused terms in all of fitness training and competition. The CrossFit system of conditioning has brought much attention to the Oly (OH'-lee) styles of weight training, as well as the Powerlifts. Both have their place in a GPP program. Their differences are vast. Functional programs include movements from both Oly and Powerlighting categories.
There are three Powerlifts:
There are two Olympic lifts:
That is it. I say that the terms are misused because there is actually more power (scientifically speaking) during Oly lifting. Powerlifting is a misnomer because while scientifically "power" measurements requires a time component, Powerlifting is in fact a relatively timeless sport. It is however a maximal effort event that requires serious work to be performed.
There are many sub-lifts that fall into certain Oly skill-building categories. Here are some of them. Many go by various names, and there are others I'm surely forgetting too.
Each of the above sub-lifts have places in one's Olympic weightlifting skill and strength development. When I use the term "Oly work," I'm probably referring to something on one of the above lists of lifts or sub-lifts.
I'm not posting links to each of these exercises yet. Google them for yourselves now.
Quite recently, CrossFit and USA Weightlifting have joined forces for a competition. The competition notice is here. Of course there is significant criticism on the part of pure Oly lifters. They complain about bastardizing their sport. I guess the critics haven't fully appreciated the sheer exposure to (or explosion of) Oly lifting that CrossFit has directly caused. Personally, before CF, I never knew what the hell a C&J or a Snatch lift was. On the other side, sounds like a lot of pumped up CFters will be competing.
PHOTO: I pirated this photo off the internet. I don't know deserves the credit. What I will bet is that more than 90% of our readers can't get into this "hole" position with even one-quarter of the load, and of those potential 5-10%, I bet less than half of them can't stand that up. This competitor's feat can only really be appreciated by those who practice OverHead Squats and Snatches!! That is true "ass-to-the-grass" and demands some serious core stability!! But if you're like me, you keep trying to get lower, and lower, and lower, and lower.....
Posted by Louis Hayes at 3:31 PM

You hit the nail on the head with your comments about the photo. Getting that low with good form with 75% of your bodyweight is a challenge. Clearly the weight in the photo is well above that lifter's bodyweight!

Regarding the CF/USA Weightlifting Competition: Great idea! I haven't heard any criticism from any Oly lifters yet, but USA Weightlifting was smart to team up with CrossFit. I haven't conducted a survey, but I'm willing to bet there are more CF locations doing Oly lifts than there are pure Oly lifting gyms!