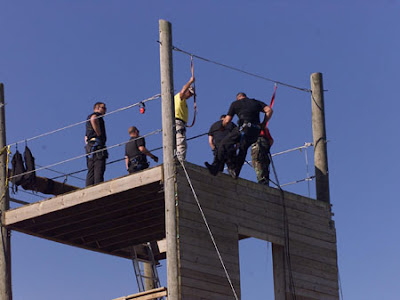 Three odd coincidental happenings during the past couple of weeks:
These three independent yet related incidents have caused me to re-examine all sorts of climbing training. (I guess someone wants me to get more fully into it!) It is hard to argue against upper body climbing movements such as the pullup and the inverted row...both included in the Prison Workout.  Then comes the MuscleUp.
I know some of these below aren't "pure" climber trainers, but lumping these pieces of equipment into a bundle is reasonable. They all work similar body functions critical to climbing.
See what additions you can make with either one of these commercial pieces, or something similar you can make at home.
Photo courtesy of: Indiana SWAT Officers Association. Photo is of FIAT SWAT Taskforce at the 2004 Indiana SWAT Challenge.
Posted by Louis Hayes at 4:10 AM