Joe R wrote a quick "race report" on his very first adventure race earlier this month. Tackling a 12-hour as your cherry-popper is pretty aggressive...but that's what Joe and his race partner Brad signed up for. The Red River Gorge American Classic AR in Kentucky is nicknamed "The Fig." Read Joe's tale below about how The Fig treated him during the 60 miles. 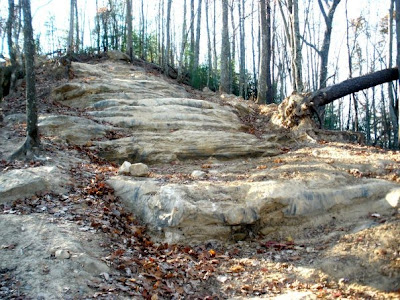 The race was brutal. Reading how others reviewed it and people's reactions after the race, I don't think I was the only one to think this. It was too long, too difficult, and the trails were too tough to complete in the allotted time. The lady who coordinated the race seemed a little overwhelmed, and I don't think she had anyone run the course before we did it.
First Leg - Trekking (7.5hrs)
This was all done through the Appalachians in Eastern KY, so needless to say the ups and downs through the hills were tough, but it was fun. We made it to the rappel portion (180ft) which I've never done. We get there and there was probably 40 racers waiting to rappel. We find out there was a lady stuck halfway down because the rope got caught in her hair. The rope ended up getting embedded in her head. Someone had to rappel down next to her, cut the rope off, hook her up to a new line, and lower her down. There was blood everywhere. We ended up saying, "F it," and walked down a steep path right near the rappel. Turns out that was a good decision because the wait turned into two hours, and the people who waited didn't have enough time to finish the race. When we got to the bottom we saw the girl getting loaded into the ambulance. We then finished the trekking portion. We all ran out of water about 5hrs into it, so we went 2.5hrs without water.
Second Leg - Bike (5.5hrs)
Got to the transition area and tried to rehydrate and eat something. At this point I was already beat. It was 3:30pm, maybe a bit later by the time we got on the bike. Right off the bat on the bike we had to go up this endless paved hill, the majority of it walking our bikes. This did provide for a great downhill. We did about ten miles on paved roads before we went off-roading. When we got to the second bike Check Point (still on Paved roads) my legs completely cramped up. I stopped and was yelling for my teammates. Luckily they heard me and came back. They came back to me standing up over my bike not being able to bend my legs. I was freaking out. Brad took my seat off my bike and rolled the bike between my legs. I stood in the middle of the road for about 5-10mins chugging water and taking a couple of potassium pills to help cramping. My legs finally loosened up, but they continued to bother me for the rest of the race. Once my legs loosened up, I jumped back on the bike, and we entered into the trails.
As you can see from the picture (above) the majority of the trails were not rideable. It sucked. Also in the trails were a bunch of toothless hillbillies that were drinking and driving these dune buggies. They were all laughing at us and asking us what the hell we were doing. At this point its getting to be almost 5:30pm and the sun is setting. We feel that we may be lost and we met up with about three other racing teams. We all agreed to stick together and not leave anyone behind because it was getting even darker. We also agreed to say, "F any more CPs, and get the hell out of the woods." None of us wanted to get raped in the woods. We finally made it to a paved street and stopped at this lady's house. She let us fill up on water and gave us directions back to the finish area of the race...which was about 12-15 miles away. It was brutal. When we were about a mile away, we stopped at this pizza shop and bought a large pizza and ate it in about 2 minutes. Then finished the race. Most of the people there were amazed that we even made it back to the finish line. For the few that did say they made it to the Canoe portion, they said the water level was too low. They had to stop and exit the canoe and carry it at multiple areas throughout.
I have never been so tired in my life.
It was fun, but next time I think I will stick to the 6-8hr races. A 13.5hr race through very rough terrain for my first one was not a good idea.
Joe
I love this stuff!! Any ARers out there who read this will certainly appreciate it too. We've all been there Joe! Reading this makes me want to race this weekend!!
Posted by Louis Hayes at 8:40 AM

hi.. just dropping by here... have a nice day! http://kantahanan.blogspot.com/