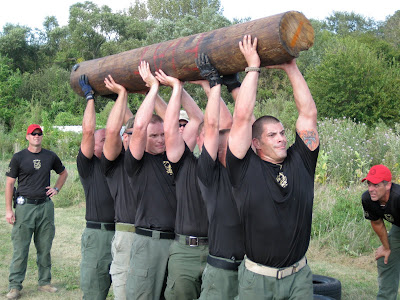 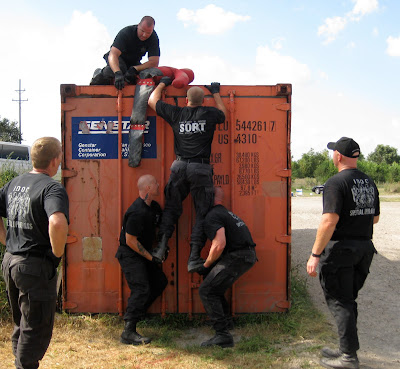 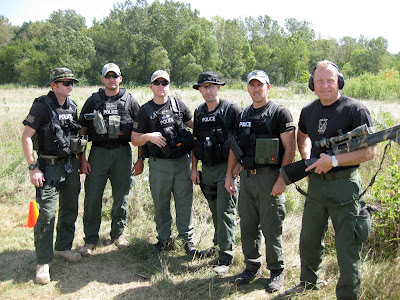 Congratulations to FIAT Green Squad (posed above) for being named overall champions during a local Police SWAT competition yesterday. L-R is Hurt, Nicky G, Josh, Jew, Soup, and The Reverend. These guys put out not only physically, but with stellar marksmanship and teamwork. Even though these guys beat my FIAT Black Squad, I'm so proud of them -- afterall we're one team!
Two of the above photos were taken during the O-course, hence no gear or weapons. The telephone pole maneuvers called for coordination among members. So did the climbs up and over the shipping container with the heavy red rescue dummy.
The event consisted of five courses, with the fifth and final course being the dreaded physical exertion course (or obstacle course). Each tactical course lasted around 4-7 minutes (raw times), and the O-course lasted between 15-25 minutes.
All the competition squads put out an outstanding effort. - DuPage Sheriff SOS, Bolingbrook PD REACT, Illinois Dept of Corrections TRT, and FIAT SWAT Taskforce. To those two teams who backed out last week: You missed an incredible experience. Thanks too to the "Red Hats" - the safety officers and judges who scored targets and kept the event rolling. This was an inaugural event that will surely grow in future years. I can't believe there hasn't been a statewide competition/challenge in Illinois for years! Hopefully this will become that event! Here are the top standings:
I won't bore you with all the details, but here are few talking points -- especially how they relate to physical fitness:
Sponsorship: the following vendors, distributors, and manufacturers donated various prizes and gifts to participants and course winners and the overall winner. These folks are asked to donate to so many great causes and events each year. They choose to support this event as one of their few. Thanks again.
Personal Note: First and foremost, I had been looking forward to this event for months. Physically, I prepared for it by wearing my vest in the gym and carrying sandbags and kettlebells. For marksmanship, I did a decent amount of live practice coupled with dry fire. During the competition, my pistol shooting sucked. I only hit 6 out of 18 shots. At least my rifle was shooting straight! On a real up note, my squad did a fantastic job on the O-course. We had that hybrid fitness of size, strength, endurance, stamina, wind, and agility. We had strong teamwork and communication throughout the course. It allowed us to make those critical mental changes, and have the steam to carry out the plans.
Again, great job FIAT Green Squad. We're very proud of you guys!
I can't wait until next year!
Posted by Louis Hayes at 9:43 AM

Hey, I want to meet these guys! Totally hot!!