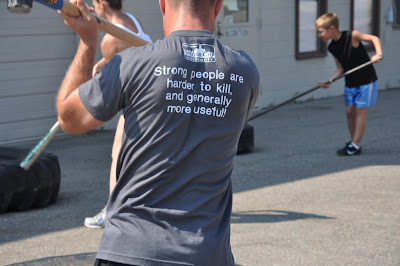 "Strong people are harder to kill,
and generally more useful!"
-- MotorCity CrossFit, Metro-Detroit, Michigan
This is a followup piece on my recent rant about strength. Please take a few moments to read it before continuing.
Let's start off with some basic definitions of the two terms: Raw and Relative.
Now the discussion.
TWO HIKERS Assume two men are hiking up a mountain trail. If each of their backpacks full of gear weigh 50#, the mountain elevation cares not how much the hikers weigh. Nature makes no distinction between hikers of 150# or 250#. The pack still weighs 50#. (Now for those of you who are doing the math, you quickly appreciate my choice of such round numbers!) For the 150# hiker, the pack is one-third his bodyweight! For the 250# hiker, the pack is only one-fifth his weight. Is this fair?
Fifty pounds is fifty pounds. Is it safe to say the heavier hiker will probably be burdened less by the pack than the lighter one? Well, maybe. There are lots of factors here that will affect the answer: cardio-respiratory capacities, stamina, etc. But generally speaking, the 250# hiker is probably stronger (in the Raw sense) than his lighter counterpart.
So if you are the featherweight, you'll be complaining that the pack is 33% of your bodyweight. But if you're the heavyweight, then you'll be answering with, "Yeah, but all in all, I have to cart up 300# versus your 200#!" So who is stronger? The debate continues....
COMPETITION CLASSES Weightlifting competitions, both Powerlifting and Olympic lifting, have weight categories. It's much like high school or collegiate wrestling. Competitors only go against those in the same weight class. Let's face it, there is no way a 55-kg lifter could ever compete against a 105-kg lifter. The disparity of the raw numbers is huge. So to be fair to "the little guys," weight classes divide the field of competitors into groups by size.
CROSSFIT TOTAL In the CrossFit world, the measure of a person's overall strength is through the CrossFit Total (CFT). This is the summation of three lifts: Standing shoulder press, back squat, and deadlift. When the three raw numbers are added, the resulting number is the "score." My last "Total" in Nov 2009 was at 1005# (and my 1RM lifts have each gone up since then too!) That is a fairly high score (95th percentile, as out of 2300+ entries on an online journal, the median and mean CFT for men is 748#. Click on link if you are member of beyondthewhiteboard.com). HOWEVER, before I get hurt while I pat myself on the back, I can analyze this number against my bodyweight. Not so good.
One of the things I like about CrossFit is that just when you think you're "there," something else explodes in your face. In this case, it was a discussion of RELATIVE strength and the CFT. I was quickly humbled to see that my 1005#CFT (latest) @ 238# (current) bodyweight wasn't all that impressive. Some of the guys who were in the 900-1100# range were significantly lighter than me. So, my 1005/238=4.22 CFT-to-BW wasn't going to turn heads. Sure I lifted over a half-ton of weight, but at my BW, it wasn't considered to be all that heavy! Click here to see one chart that dissects the CFT-to-BW. There are so-called "little guys" who have CFT-to-BW in the 6.0 to 7.0 range. While those are elitists, they do exist. These guys have not only a lot of Raw Strength, but their Relative strengths are off the charts!
THE NON-ANSWER. So where does all this discussion of Raw and Relative Strength leave us? Raw strength is obviously best. Nature does not account for the bodyweight or size of a person. A 300# fallen tree limb on top of a victim is still 300#. A downed partner or police officer is still 200# regardless of the size of the rescuer. A 50# piece of travel luggage will always be 50#. Strongest is best. No doubt.
But comparing strength to bodyweight does have some merit. For one, I believe in benchmarks or standards. For example, a 1xBW shoulder press, a 1.5xBW back squat, and a 2xBW deadlift are all great standards. Aside from the actual number of raw pounds, the percentage of one's BW is a decent measuring stick. And it humbles us Clydesdales who may not have the efficiency of some of the "little guys." So here are my challenges:
Big dudes: With your size, you are expected to be strong. Start looking more at Relative Strength. Lose a few fatty pounds to increase your efficiency. Hit some new benchmarks or standards with relation to your BW -- and log your BW in your journal when you hit certain personal records. You're strong. Now, how efficient are you?
Little guys: Don't forget Raw Strength. Nature does not distinguish your size from the bigger folks. Get stronger and quit complaining about how much stuff weighs compared to your bodyweight! Don't be satisfied with some big ratios. Your raw numbers might still suck.
Middleweights: You must balance the naked numbers against your efficiency. Your raw scores are higher than the Little Guys, AND your ratios are higher than the Big Dudes! At least I hope so. You have the opportunity to be a true hybrid athlete. Are you seizing the opportunity?
GOALS: There is value in using both measurements (Raw and Relative) with regards to Strength. Set goals for both raw poundage AND as a function or percentage of your bodyweight. For me, my goals are: 1xBW shoulder press, 1.75xBW back squat, 1.25xBW power clean, 1xBW power snatch, 1xBW overhead squat, 2.5xBW deadlift, 5xBW CrossFit Total. How to get there? Lose fatty weight, and oh yeah.....get stronger! I'm inching in on some of them.
Posted by Louis Hayes at 5:00 PM

Like most wise words, I think your lead quote came out of Rippetoe's mouth first. Everything else you wrote was scarily correct.