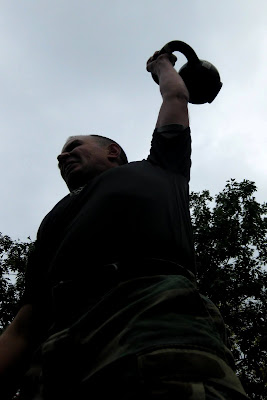 Parts 1-4, click here.
Extremism should not and cannot be painted with a broad brush as wrong. Expert witnesses are extremists. Professional and Olympic athletes are extremists. Valedictorians are extremists. To simply say, "Extremism is evil," is ignorant. Extremists find themselves at the pinnacle of ability, knowledge, and ethics. They are committed to causes, and strive for the best.
Certain terms ring sour with extremists:
These phrases are filled with feelings that find a home under the bell curve's bulge....nothing particularly special. To the extremist, they invoke gray, passionless emotions.
Modern health clubs are filled with folks who are passionless about their workout programs. They merely go through the motions of a daily or weekly routine. They accept marginal results...in both mirror and performance. But it is relatively painless. Few missed goals. After all, one must actually HAVE a goal before one can fail reaching it. There is a certain comfort level in "not failing." So to make sure one does not fail, one only needs to not set a standard.
Failing is painful.
Or is it? I find more pain in not having goals. I find more pain at not competing. I find more pain in not having a chance to succeed. Failing to me means I gave it all I had in a risky effort, but came up short. Failing means I have to try harder next time. Commit to a new course. Visualize myself being the champion. The Extremist.
So who promotes this Conspiracy Against Extremists? The populous. The cold and timid souls who know neither victory nor defeat. It's everywhere we look. From labor unions to little league baseball, participants are rewarded for doing a lukewarm performance. Low standards are set as a rock-bottom baseline. Do less....get more. Why would a little league team strive for the championship game if all players of all teams get trophies regardless of standing? Why do labor union workers do the bare-bones least they have to? Because there is little reward for doing any better.
Why do health clubs promote lack-luster fitness programs? Because clients are willing to come back as long as they don't feel the physical pains of true effort or the discouragement of missed goals. They come back with their money, each week, each month. They do the same thing over and over again with little results. They become the bulge in the bell curve. And they somehow gather others to their world of missed opportunities and dull abilities.
Our system is broken. Few reach down to find a hearty desire to actually excel at something. If you really look out there, there is little competition to fight. Most are stuck in some comfortable existence that has barely a faint glimmer of reaching where extremists strive to be. If you want to be the best at something, it's not really all that far out there. The competition is lazy and unmotivated....unfocused and ignorant....unwilling to commit and quits when stumbles. They are no match for Extremists.
What I want is this:
A climate that encourages goal-setting, painful physical efforts, ethical competition, and a thirst for knowledge, populated by those who know a good cause...and strive to be a champion for it! I want all people to take risks at something important in life. Real risks. By setting some goal so lofty you might not actually reach it. Not at first attempt.
I want people to claim a stake in their own success. Not sitting back expecting some fair distribution of prizes or rewards. I want people to take a bite out of failure and chew on it until a new plan, a fresh path, a renewed vision of success is crystal clear.
I want everyone to experience the grandeur emotions that accompany successes and victories and pitfalls and failures I have been blessed with. Not everyone was born to parents who told their young, impressionable, naive children that they could do anything they wanted to in life. Not all children believed their parents. I did.
I hold firmly that just MAYBE I can be that motivator to some of you to set that goal. Just maybe I can be that friend that stands at your side watching you realize a dream. Just maybe I can shake your hand or hug you when you are bursting with that joy of winning out over adversity. Maybe I can be that voice that first calls you an Extremist....
Posted by Louis Hayes at 3:15 PM

Great post. The same could be said for law-makers making decisions on being able to stay in favor and be re-elected, economists making statements that are more favorable so as not to create panic or euphoria, the list goes on. Many of the "systems" we experience daily are "broken". Nobody is willing to do what is necessary to change because of other adverse things that may happen...sad but true.

I was looking for the "Like" button, but realized we are not on Facebook :) Very well said, just like 75% of your stuff is... just kidding, you're well above that but I did not want to provoke that "extremist" attitude.