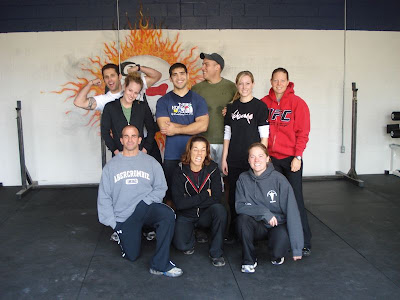 I visited CrossFit Phoenix (XFITPHX.com) in Arizona last week. It's owned and operated by two Phoenix firefighters, who graciously accepted me from "the other side of the house." I dropped in for a Saturday WO....and anxiously watched as the trainer penned the day's WO on the whiteboard. I couldn't believe it! It was the Lumberjack 20. Even though I had done it only 6 days before, I did it again.
The girls at XFIT PHX are very serious about their training. With all the required space for this WO, our group had to split into two heats. I was in the second heat, and was the only man. I struggled to keep pace with the women....who absolutely killed the Lumberjack 20! I came to learn the programming there is done with a "strength bias"...meaning that most daily workouts begin with a strength-building component before any MetCon. It shows.
I wish I could have hooked up with XFIT PHX earlier in my trip. I would have loved to jump in on another WO at their facility. Next time. 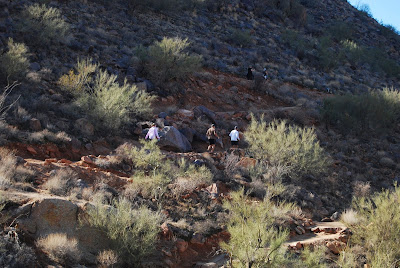 Also, I went on a couple of hikes/runs/climbs in Arizona. I'm the one in a brown shirt following close behind my friend Bud (white long sleeve). Bud is a few months shy of 60 years old, but he's fitter than most half his age. He's a former marathoner, and now spends considerable time hiking. As most of you already know, I'm an avid stairclimber...which has really helped on these hikes. My brother snapped this photo of Bud and me at Pinnacle Peak Park in Scottsdale, AZ. One my other favorite hikes in the Phoenix area is Camelback Mountain's Echo Canyon trail. (and for the record, I wore my Vibram FiveFinger shoes on all hikes.)
Posted by Louis Hayes at 9:44 PM

do you prefer the nike frees or vffs for crossfit?

Well, I've never tried the Frees. I began using the VFFs for deadlifting and kettlebelling...and they worked awesome. So I started to use them for all my other exercises too.

It was such a pleasure having you and Jackie, even if you did take the wrong test :)(that is just a joke here between Fire and PD). If you are EVER here again, please come back to see us.