In honor of Jack LaLanne, "Soup" remembered him in a unique way. Many of you might know Soup from the post on a do-it-yourself dip station. (According to web tracking stats, that post on DIY dip station is the most visited page on this whole blog!) 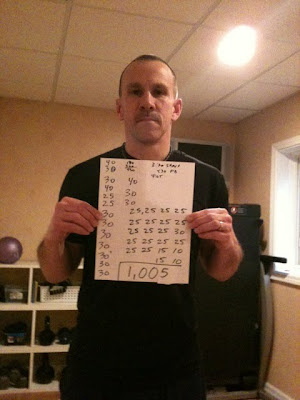 Now, to Soup's update:
As I started work on Monday, January 24th, I read a headline about the death of fitness guru Jack LaLanne. I’m old enough to remember seeing him on various shows when I was a kid and seeing some of his fitness feats. I remembered seeing him swimming handcuffed, pulling boats behind him, or dropping to the ground on Johnny Carson or Merv Griffin to do some one arm pushups. Some call him the Father of Fitness, some just called him some crazy old man but he was the first person to bring the importance of daily exercise and nutrition to the households of America.

Fellow bodybuilder and former governor of California Arnold Schwarzenegger credited LaLanne with taking exercise out of the gymnasium and into living rooms. LaLanne once constructed a makeshift gym in his backyard, “I had all these fireman and police working out there and I kind of used them as guinea pigs,” he said. It reminded me of all the things I do now, bodyweight exercises, homemade equipment, Crossfit and challenging myself daily to improve my fitness level.

Jack LaLanne once said, “The only way you can hurt the body is not use it, inactivity is the killer and, remember, it’s never too late.”

Rest in peace Jack, thanks for the sore triceps and the motivation.