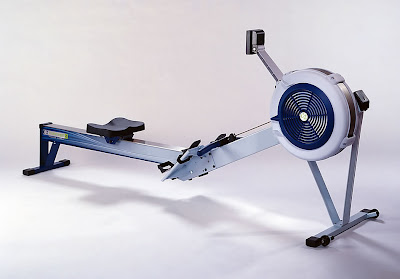 Today (Dec 20th), is Day 25 out of the total 30 days of the Concept2 Holiday Challenge. The rules of the challenge are few: Row 200,000 meters between Thanksgiving and Christmas Eve. An alternate option is 100,000 meters. Participants break up the daily or weekly totals to their own liking.
I am currently sitting at 189,000 meters, plus what I row today. Getting closer.
Now to Tom G's birthday row...
At the beginning of the challenge, Tom G committed to rowing 52,000 meters (over 32 miles) for his 52nd birthday in mid-December. I pledged early to join him, as I've done for his birthday workouts since we've been working out together:
This past weekend, we were joined by Bob H for the endurance birthday row. We met at Tom's house at 5:45am., each with a C2 brand machine. The pulling stated promptly at 6:01am. No one finished in under 5 hours. Bob reached it first, followed by Tom, finished by Lou.
We each had a different pacing philosophy, but fairly consistent in our plans for about 10k per hour. I'll summarize Tom's and Bob's plans here, and allow them to expound in comments if they wish.
I was the least experienced rower of the three, and used a "short work-short rest" interval scheme. Did it work? Well, I finished 52k without ever rowing more than 10k in a day. It sorta correlates to a run-walk plan for a marathon without ever running more than 6 miles in a day. Testament to high-intensity functional movements? Not sure. Maybe. I think even moreso that I went into the event on only 2.5 hours of sleep.
My hands took the worst beating - blisters and calluses. Muscular fatigue hit in my traps, calves, hip flexors, and lats. Tom and Bob each experienced different areas of fatigue/soreness as the event went on. I am guessing that this event exposed each of our weaknesses in that certain movement pattern of rowing. Mine just so happened to be traps, calves, hip flexors, and lats. Thoughts?
Hydration and nutrition were critical aspects of this endurance event. Much like my work-rest plan, I went in with a strategy to drink and eat small amounts often. Fruits, bagels, peanut butter, Gatorade, water, banana muffins, dried apricots. I thought about using energy gels, but thought solid foods might be more beneficial. How many calories burned? about 800 per hour = 4,000 calories.
The worst part -- I wanted to take a photo of my digital readout on the rower when it hit 52k. I found out the hard way that it resets after 50k. What the heck?
I didn't mind taking a 52k chunk outta my 200k challenge. After a day of rest, it's time to get back in the seat and pull some more.
Posted by Louis Hayes at 10:10 AM

one question that has come up: what was my damper setting at? I kept it at 6 the whole time, except for one interval early -- I bumped up to 8 and decided to keep at 6 for remainder.

After the row I ate around two pounds of sushi, got a massage and fell asleep for a couple of hours. Needless to say I was pretty tight all over for around 24 hours. I am ready to get back to some light lifting and finishing the 200K challenge! I would be the first to agree with you about high intensity functional workouts. Most of my training is done in that way and I came through this challenge without to much damage. It was great to finally meet you guys!